Evidence of a Christmas spirit network in the brain: functional MRI study

Christmas can be intense and kind of emotional.

Whether it’s that sinking feeling when you hear All I Want for Christmas for the 100th time or agonising about where you will spend Christmas day, there’s a lot going on. But it can also, of course, bring lots of joy and excitement. In recent years, scientists have explored how Christmas affects our bodies and minds.

Studies have shown that singing carols can relieve stress, and even found that Christmas Eve can be a peak time for heart attacks. Bryan Haddock, a medical physicist at Copenhagen hospital, recently went in search of the Christmas spirit using brain imaging techniques in a light-hearted Yuletide study.

He was looking to see how people responded in different ways to Christmas images. His team ran fMRI (Functional Magnetic Resonance Imaging) scans on a group of 26 people and found that the "Christmas Spirit" network had a significantly higher activation in people who celebrate Christmas with positive associations as opposed to people who have no Christmas traditions and neutral associations.

The group was asked questions about their experience of Christmas after the scans were taken. They were asked to fill out a questionnaire about their Christmas traditions, feelings associated with Christmas, how long they had lived in Denmark and ethnicity.

Mr Haddock concluded that “there is a Christmas spirit network in the human brain comprising several cortical areas. This network had a significantly higher activation in people who celebrate Christmas with positive associations as opposed to people who have no Christmas traditions and neutral associations.”

Mr Haddock says, “The answer is that it could be either or both. We are catching the brain responding to the Christmas stimulus and the brain is fast. Several steps and subprocesses are being caught at once so it is possible one of the activated areas is recognising while another is creating a response.”

He also suggests that “although merry and intriguing, these findings should be interpreted with caution.”

So how did they find the Christmas Spirit network?

“In fMRI, you run a sequence of images and see if there is any stimulus in different parts of the brain.”

“The person lays in the scanner and we took a measurement every three seconds to monitor changes in blood oxygenation in the brain.

“We ran a sequence where we presented everyday images but then alternated it to a series of Christmas theme images, then back to regular images and repeated this cycle six times.”

“All the time, we were taking the same measurement looking to see which parts are changing in time with the images changing within that cycle.”

“We looked at fluctuations and we saw reactions (to the pictures being changed) in their visual cortex.” 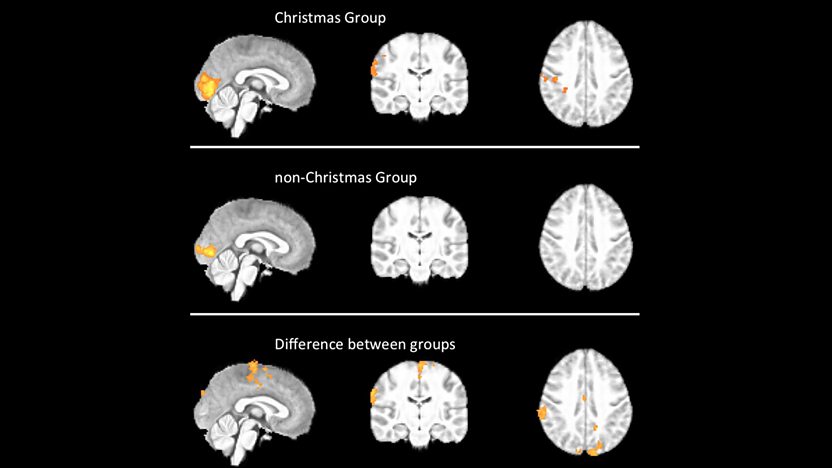 Mr Haddock found that the part of the brain that lit up is also the part that is active when we have emotions shared with others - the primary motor cortex and pre-motor cortex. This part of the brain is also important for controlling body movement. Happy memories and pleasant behaviours are likely to activate the area.

However, Mr Haddock acknowledges there are limits to the study and that his colleagues in neuroscience might suggest that just because we can localise emotions in the brain, it doesn’t contribute much to how we understand them.

Unfortunately this experiment can’t provide definitive conclusions about the emotional impact of Christmas on the brain. However, he says, “it’s not that far fetched to suggest a connection between these areas and why they we feel warm or happy when they light up.”

So does Christmas make Mr Haddock’s brain light up?

“I still have knee-jerk responses to Christmas stimuli. The first time I hear certain songs or when I go get the tree, I’m definitely getting some positive reactions.”

“I find it interesting to reflect on how we react at different stages of life. As a teenager I started to miss the excitement I felt when I was younger. Some of the things that really triggered me as a kid, the first time I saw a gingerbread, or practicing the Christmas play - all those things didn’t excite me so much when I was a teenager. But now I have kids of my own and I have a different kind of excitement to experience it again with them.”